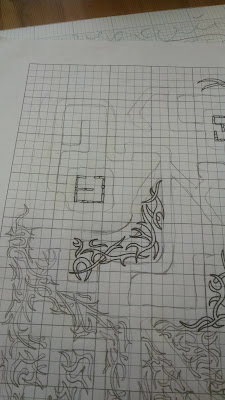 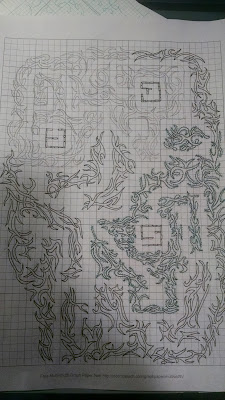 Penciling complete.  As I started inking, I found that the finer-detailed thorn bushes were going to be a bit too much labor, so when over-inking, many of the thorn bushes were enlarged or extended.  Thorn bushes on the right-hand side are inked with additional color stippling for thorns. 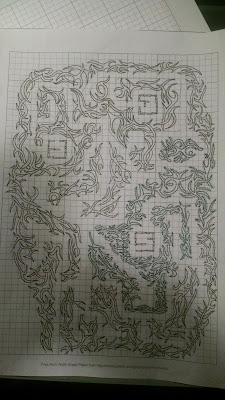 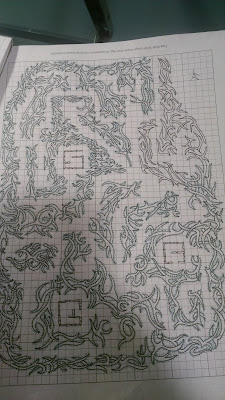 Time, about three days on and off, sore neck, sore wrist, ugh.

And the final product: 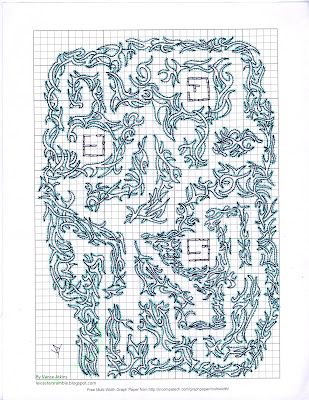 Three minotaurs; Urntherther, Turoard, and Em'ald, in the way of their kind, inhabit a maze. As druids, they have grown their thorn-hedge maze as a place of sanctuary and meditation.  Each minotaur meditates within their own stone hovel in the heart of the maze.

The hedges are over 15 feet tall, cultivated into an iron-hard barrier. The brutal thorns, three to six inches in length, harbor a triple threat.  Anyone entangled or thrown into the hedge will receive 1d4+1 points of damage. Two additional saves are required, one to ward off 1d4 turns of paralysis to a random limb, and a second to ward off infection (1-2 points of damage per day until cure disease or save).

The minotaurs, as keepers and cultivators of the hedge-maze, have an almost symbiotic relationship with the plants.  The hedges will withdraw their thorns in the precedence of the druids, allowing them rapid passage if need be.  Likewise, the druids may open and pass through the thorn-walls as by plant doorway if they are in an adjacent corridor to trespassers. Because of the bond of the hedges to the druids, incursion by any other druid will be communicated to the minotaurs, causing them to seek out and eliminate the interloper. The heavy thorns provide sanctuary to an inordinate number of songbirds. The sussurus of the birds provides background for the druids' meditation, and any changes in the birds' songs, startled flights, or stilled silence from the birds will warn the druids of intrusion...

(Good morning Reddit, thanks for the repost)
Posted by Vance A at 21:45