Mini-Review: Off the Beaten Path 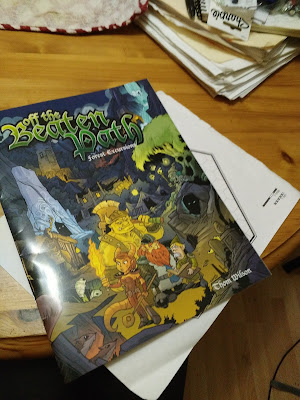 I supported +Thom Wilson's Kickstarter for the project, opting for the system-neutral version of the book.  The book also has a variant printing published with adventures statted out for Swords and Wizardry Light.

The setup for this book of encounters and mini-adventures is to fill space and opportunities in case the pesky PCs wander off the map, need a small side-challenge, or a light on-off is necessary.  Thom prepared 23 one- to two-page adventures, typically with a single challenge or objective.  The encounters are classed as 'Easy,' 'Moderate,' and 'Hard' for a range of levels up to around 6.

Of course, with the un-statted nature of the system neutral version, modding critters or challenges would be achieved fairly readily.  Likewise, although some treasure or magic items are fairly clearly delineated, plenty are left blank, such as the 'Magical Short Sword' shown below: 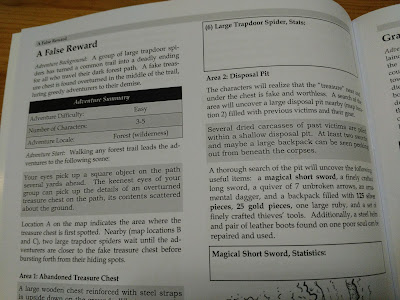 Which allows the GM to craft an item appropriate to the level (or perhaps needs) of the party members.  I appreciate this format, and mentioned it before in my review of The Staff of the Last Hill Chief.  Coincidentally, Monkeyblood Design crafted several of the maps in OTBP, so may have had a hand in influencing this open concept.

Speaking of maps, due to the single encounter-area or mini-dungeon typical of the scenes, most are fairly simple and brief.  Thom and Monkeyblood shared mapping duties. 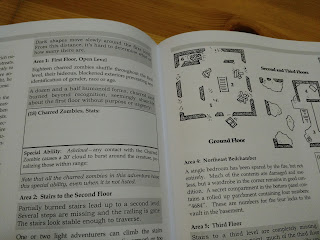 The adventures provide a variety of baddies to combat,as well as a few traps and puzzles to worry out.  Per its title, all of the OTBP scenes take place in the wilderness, to be encountered along the road, or in the boonies if the PCs wander off the road to check out something curious, camp out, or otherwise stray from the path...  Thom reports that he is working on a follow-up desert-themed collection via his Patreon.

While most of the encounters are standalone, four of the adventures can be linked through items found in individual scenes (maps, clues, etc.), which could either drive a few sessions of play, or pop up in later adventures.  One quibble - the linked scenes are referenced by Excursion #, but neither the page headers or table of contents number the scene titles.  Edit:  Thom pointed out that the Excursion numbers are printed along the footer of the pages - I hadn't noticed them in my read-through.  Doh! Thanks for the correction.  That said - adding the #s to the TOC will be a help.

From my read-through of the collection, the scenes are well-written, with sufficient but not too elaborate descriptions.  Because of Thom's one to two-page limit per scene, even the 'largest' areas have no more than 10 encounter areas.

Thom did also fall victim to box text (shaded in this case) but we'll forgive him this.

The product was delivered promptly after the end of the project.  Thom planned ahead well, with the majority of writing (and booklet cover) pre-prepared, leaving him only stretch goal additions (adventures, mapping) to create at the end.

Overall, this looks to be a useful resource and inspiration for keeping the party from wandering aimlessly in the woods!
Posted by Vance A at 21:39