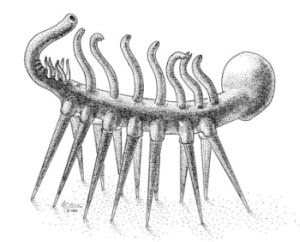 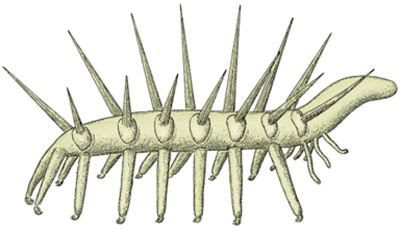 That descendant is the velvet worm:

That shared body part is a powerful 'jaw,' which is comprised of evolved legs that have migrated into the head.  The worm immobilizes prey with a double jet of sticky liquid, then pierces the prey's shell with the jaw before liquefying its organs.  Lovely.

Such a predator must be enlarged and statted up.  The cave fisher has nothing on this beastie...

This large invertebrate predator stalks the undergrowth of wet tropical forests, immobilizing and consuming prey indiscriminately.  Although mostly blind, the velvet worm senses motion via vibrations and air movements, and will silently stalk its prey, surprising on a 5 in 6 chance. Upon approach, the worm will fire twin jets of rapidly solidifying sticky slime. The slime can be fired up to 25 feet. The targeted creature may escape entanglement by roll-under strength at -2.  If the entangled creature can not escape, the worm will attack to pierce its flesh for 1d8 damage, and on a successful hit, inject liquefying enzymes into the victim (2d6 damage/turn, Save at -2 for half damage).