Of Dice and Dragons is sponsoring this month's Carnival topic of potions.

Per Omas Qualor is an itinerant healer and alchemist who somehow glommed onto the party one or two towns back.  His pack clinks with vials, pots and retorts.  No one wants to get too close to him, as he reeks of rancid distillations and esters, but no one has come up with a way to ditch him, quite yet.

He goes on and on about his researches into the 'essential essences' of the various races, and how his potions are attuned to emphasize and amplify the the natural 'humors' of the individual.  Qualor claims to have distilled potions that are attuned to the 'internal chymistry' of the individual races.  "Wait! Don't go away, I have a number of vials here if you would care to sample!"

Qualor fumbles in his bag. He lines up three tightly capped vials from his pack. "Do you seek vitality (red), sensations (yellow), or resistance (black)?" he asks.  The uncapped vials release putrid scents, nearly gagging their intended beneficiaries.  Holding their noses, they drink, doubtful of Qualor's competence...

In Classical Greek medicine, as well as in Roman and Islamic medical theory, the concept of the 'four humors' created the framework for disease theory and treatment.  This 'humorism' persisted until the Renaissance in Europe, not truly being discredited until the founding of modern medical research in the 1800's.  Humorism (or 'temperament') was based on achieving a balance between the four humors in the body (roughly corresponding to other quartets, such as the four seasons, or four classical elements).

The temperaments, melancholy, phelgmatic, sanguine, and choleric, defined one's character, their strengths, as well as susceptibilities.  Qualor has tapped into these four temperaments as they apply to the four primary races.  Each of his three potions will adjust its effect based on the racial temperament of the imbiber. 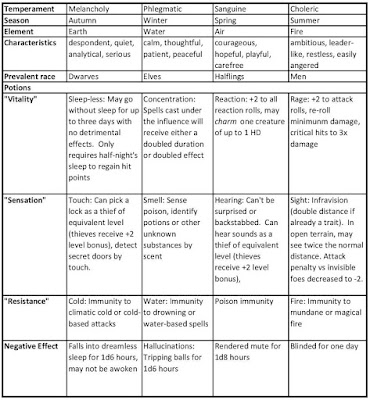 A particular individual has a 70% chance of  conforming to their racial temperament (d100).  Those atypical souls will have a 10% chance to match one of the other temperaments.  All positive effects last one day, with the exception of 'Sleep-less' which may last up to three days.

And, occasionally, an individual has a bad reaction to the potion, whether it is not truly attuned to their temperament, or perhaps just a bad batch.  There is a 10% chance that, instead of the intended result, the recipient will, instead, experience the negative side-effect appropriate to their temperament (save vs no effect) ...

Additional potion musings here.
Posted by Vance A at 09:12